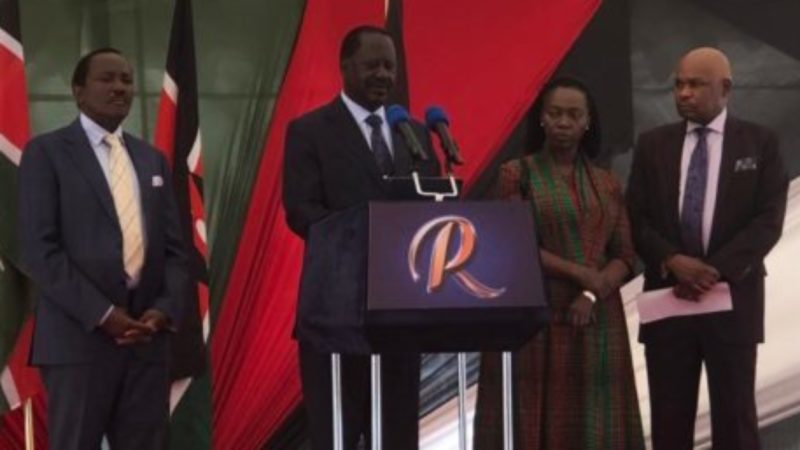 Azimio La Umoja One Kenya Coalition leader Raila Odinga has described the ongoing petition before the Justice and Legal Affairs Committee (JLAC) of the National Assembly on the removal of four commissioners at the Independent Electoral and Boundaries Commission (IEBC) as a political witch-hunt.

Odinga told Journalists Thursday in Nairobi that the ongoing probe is a revenge mission by President William Ruto’s led administration against IEBC Deputy Chairperson Juliana Cherera and commissioners Francis Mathenge, Irene Masit, and Justus Nyang’aya for expressing reservations over the process that lead to the declaration Ruto as Kenya’s 5th President.

The Opposition Chief claimed that the petition is being steamrolled by the Speakers of the National Assembly and the Senate and President Ruto.

“The four Commissioners are supposed to appear before this Committee, be found guilty, and be made to appear before a tribunal to be set up by Ruto that will confirm their guilt. They will then be thrown out of IEBC,” he said.

He added that the “selective injustice” against the four commissioners takes place despite the existence of other petitions seeking the removal of Wafula Chebukati, Abdi Guliye and Boya Molu as commissioners of IEBC.

“The criminal Ruto stooges at IEBC are being protected and rewarded while those who fought for integrity of our elections are being punished,” Odinga said.

Odinga cited the petition by Milton Nyakundi Oriku dated 19th September 2022 against the three-Chebukati, Guliye and Molu- was received at the Main Records Unit of the Senate on 28th September 2022 which he said is yet to be tabled before the Senate.